I've been to busy to write lately. Actually I still am. I just thought I'd update you on what I've watched the past few weeks.

Yeah, a lot of you may already have seen this recently because I think the Alamo showed it not that long ago. But in case you haven't, you can rent it. Something Weird Video released it on DVD recently. This movie is about a guy who smokes weed then has seizures that lead to him transforming into a turkey. I know that sounds incredibly silly, but it's kind of done in a serious way that makes it demented. It fuckin' came on TCM the other night at 2:00 AM. Can you believe that shit!? Insane. Couldn't find the trailer, so here's an Adam Ant video.

Here's Chris Penn trying to do what his brother did better. This movie coined the dude-phrase "It's Casual". I remember my older brother and his friends saying this a lot. It features a clean-cut Eric Stoltz hot off the heels of some breakthrough performances in "Surf II" and "Makin' It". He plays a total square in this one.

Dolph Lundgren is really good in this. This movie is awesome. This movie is rogueish and features Billy "Tae Bo" Banks and Bolo Yeung. There's basically a lot of beatings and unintentionally funny shit happening at all times.

A fantastic early 70's Bronson movie. It starts off in New York and ends up in L.A. It has a fast pace, good music by Roy Budd, great scenery, and tons of insane action and car chases. Shit, this movie has Stuart Margolin in it! It's got a little bit of everything going for it. Only on VHS I think.

Here's a fucked up scene:

Great early-80's horror trash that used to come on TV when I was a kid. Sorority house pledge night gone bad with tripped-out nightmare sequences and a maniac killer. What more can you ask for?

A weird, sadistic mid-80's trash-fest starring Mary Woronov as a crazed doctor who injects women prisoners with high doses of experimental narcotics. Lots of running around and screaming in this dismal wrong-bomb. I kind of like it's weird heavy metal video vibe too. Out of control sequel. If the begining robbery scene of this movie doesn't hook you, then you've got ADD. Maniac Cop joins forces with a really amped-up serial killer weirdo who ends up being a Maniac Cop groupie! They go kill together and even release inmates from a prison! The apartment that the serial killer has is awesome. You get to see flashback scenes of how Maniac Cop got his scarred look. It's great. 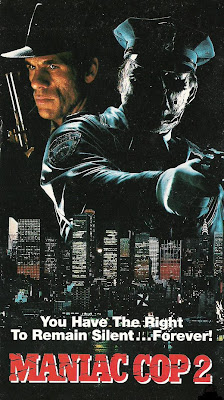