Black Samurai is great. It's one of the last Jim Kelly movies that I actually watched but I've known about it since I was about 8 years old. I always wanted to rent it from Video Movies Unlimited in Harker Heights when I was a kid, but probably rented something dumb like Make Them Die Slowly or Rawhead Rex instead. Jim Kelly pulls people's arms back and kicks their spine! He's usually sporting a suede jogging outfit at any given time. His sidekick looks like Rick Reed. For some strange reason, Dan actually sat down with me and watched this movie. The scene where Jim Kelly fights a hawk is crazy. He boxes it. Right after this movie came out, Al Adamson worked with Jim Kelly again in another trashy masterpiece known as Death Dimension (aka Freeze Bomb, or The Kill Factor). There's a clamshell VHS version of Black Samurai on Video Gems. I just rented the DVD from I Luv Video on Airport. There's a scene with a dungeon full of cobras in this movie. Available at Vulcan and I Luv Video.

NOTE: The second I was done posting this blog, I looked up and saw Jim Kelly on the TV screen. Dan was changing channels and Enter The Dragon was on. How weird.

Zu Warriors From The Magic Mountain (1983)

If you haven't seen the original version of Zu Warriors Of The Magic Mountain, you're in for some shit.There's a good DVD version that Tai Seng put out, but the VHS version looks great also. Really good for when you have friends over that can shut the fuck up during a movie.
Posted by Blake at 9:51 PM No comments: 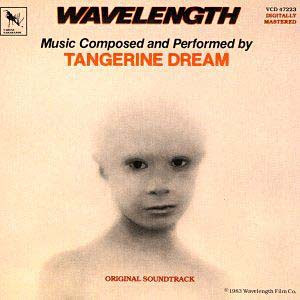 Wavelength is a movie that used to come on TV a lot when I was a kid. It's pretty entertaining. Robert Carradine from Revenge Of The Nerds is in it and so is the fabulously trashy looking Cherie Currie from the 70's all-girl rock band the Runaways. Currie's character can hear voices coming from what turns out to be a secret underground Air Force bunker in the Hollywood hills. Her and her boyfriend go investigate inside the bunker one night and get caught. They learn that the voices she was hearing are coming from 3 aliens that are being kept alive in a chamber within the bunker. The people in charge of the bunker try to bury her and her boyfriend alive with the aliens. The boyfriend helps the aliens escape and then they all flee out to the desert. There's not too much action, but there's plenty of weirdness including a psychedelic scene where the aliens are using mirrors to soak up the sun's energy out in the desert. There's also a great synthesizer score done by Tangerine Dream. All in all not a mind-blower, but definitely worth checking out for 80's trash pleasure alone. Available at I Luv Video on VHS in the Sci-Fi section.
Posted by Blake at 7:07 AM 2 comments: 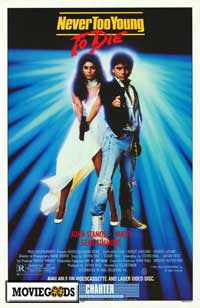 This movie is so out of control I don't even know where to begin. It may be one of the greatest 80's movies ever made. It's main stars are John Stamos, Vanity, and Gene Simmons (playing a psychotic hermaphrodite). Simmons' character Velvet Von Ragnar is trying to take over the country by poisoning all of the nation's drinking water. He looks like a cross between Patti Labelle and Divine. He has a long, sharpened fingernail that he stabs people with. He does a drag routine at a club wearing this hideous Vegas / Rockettes outfit and sings a song that is so bad it's hard to watch in the privacy of your own home. John Stamos plays Lance Stargrove, a gymnast who lives in a college dorm with a nerd roommate who invents weapons and wears neon clothing. Vanity plays the role of Danja Deering, driving a nice Corvette, kicking ass and killing bad guys. Stargrove's dad is killed by Von Ragnar and afterwards he inherits his farm. While there, he loads up on uzi's and has sex with Danja. His nerd roomate shows up and they cruise around on a crotch rocket killing bad guys. Von Ragnar keeps going back and forth between being a man and a woman and every scene with him in it is surreal. I was having nightmares with his character in them last night because of this movie. I think Gene Simmons is really embarrassed by his role in this film, because it's never been put on DVD and all the clips on youtube have been pulled. It's a shame because I think this movie would really blow people's minds. I mean, it's really, really insane. I've never seen anything like it. So fucking recommended!! Only available on VHS at I Luv Video on Airport.

UPDATE:
I just realized that this incredible movie will be playing at the Alamo Ritz theater for Terror Tuesday on April 7th at 10:15. Now all of you can see it. If you don't show up, you're missing out!
Here's Zack's review: Here
Posted by Blake at 10:02 AM 1 comment: